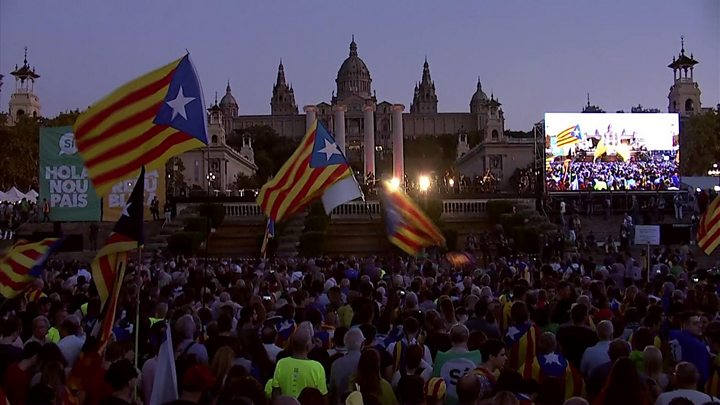 Media captionThere was a festive atmosphere at the rally
Tens of thousands of Catalan separatists have taken part in a final rally ahead of Sunday's planned referendum on independence from Spain.

Regional President Carles Puigdemont told the crowd that he believed Catalonia would be taking its first steps as a sovereign nation.

Thousands of extra police have been drafted in from across Spain as the government seeks to stop the ballot.

Google has deleted an app used to direct voters to polling stations.

Phone users in the region who try to download the app from Google Play get a message saying it is not available locally although those who already have the appcan still use it.

The corporation said it was complying with a court order.

Catalonia, a wealthy region of 7.5 million people in north-eastern Spain has its own language and culture, and a high degree of autonomy, but is not recognised as a separate nation under the Spanish constitution. 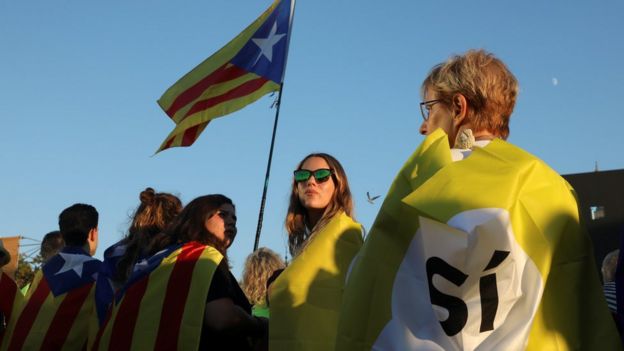 Image copyrightREUTERS
Image captionA woman holds a Catalan separatist flag in Barcelona on Friday
Pressure for a vote on self-determination has grown over the past five years but in the 2015 regional election, won by an alliance of pro-independence parties, about 40% of voters backed parties loyal to Spain.

Will the vote really happen?
Police across Catalonia have been ordered to prevent public buildings being used as polling stations on Sunday. 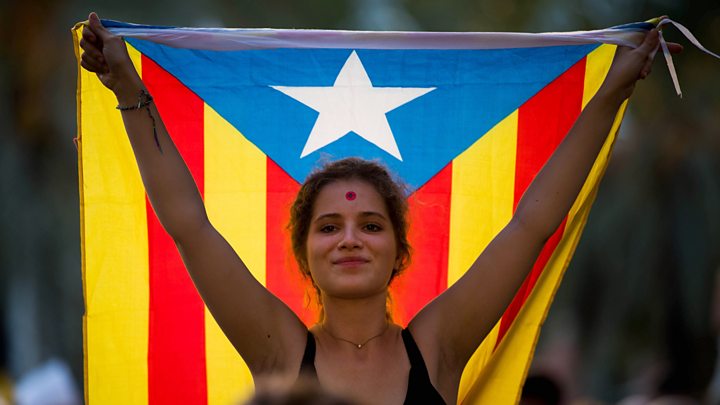 Media captionWhy some Catalans want independence
Masses of referendum materials have been confiscated by police in recent weeks and officials involved in running the campaign face prosecution.

However, the Catalan government said on Friday it planned to open more than 2,000 polling stations regardless.

During his speech at Friday's rally Mr Puigdemont said: "Friends, so that victory is definite, on Sunday let's dress up in referendum (clothes) and leave home prepared to change history."

He and his predecessor, Artur Mas, later arrived for the rally in Barcelona where the stage was decorated with the words "Referendum is democracy" in giant letters. 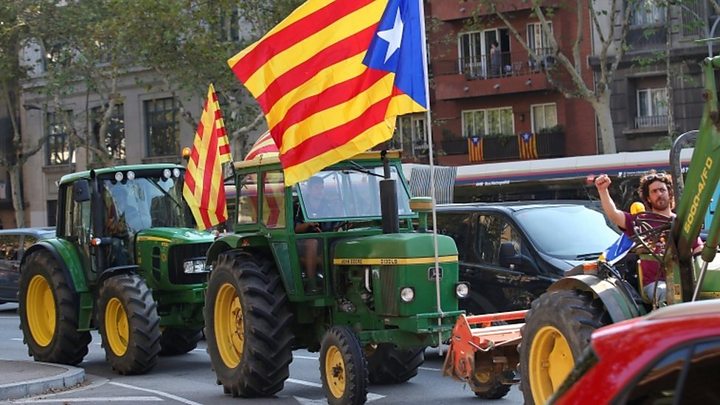 Media captionTractors have gathered in Barcelona to show support for the referendum
Why is Madrid so opposed?
Spanish Prime Minister Mariano Rajoy stared down Catalan secessionists when they held a trial referendum in 2014, offering no concessions to their demand for a legal vote.

He has pledged to stop the 2017 vote, saying it goes against the constitutionwhich refers to "the indissoluble unity of the Spanish Nation, the common and indivisible homeland of all Spaniards".


Ministry of Economy, Industry and Competitiveness, Eurostat, Bank of Spain
Getty
Spanish unionists argue Catalonia already enjoys broad autonomy within Spain, along with other regions like the Basque Country and Galicia.

Government spokesman Iñigo Mendez de Vigo accused the Catalan government of being inflexible and one-sided but it is a charge Catalan nationalists throw back at Madrid itself.

In other developments on Friday: 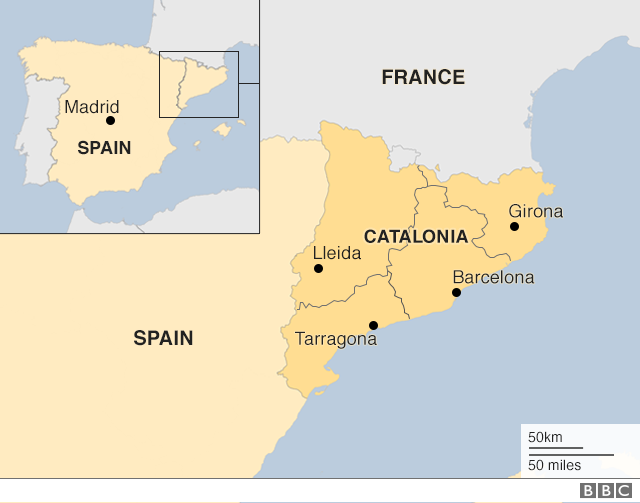 Despite the tension in the region, demonstrations by independence campaigners have been largely peaceful.

"I don't believe there will be anyone who will use violence or who will want to provoke violence that will tarnish the irreproachable image of the Catalan independence movement as pacifist," Mr Puigdemont said.
Napsauta laajentaaksesi...

The Catalan parliament enacted its own law in a vote on 6 September. There is just one question on the ballot paper:

"Do you want Catalonia to become an independent state in the form of a republic?"

And there are two boxes: Yes or No.

Under the controversial law, the result is binding and independence must be declared by parliament within two days of the Catalan electoral commission proclaiming the results.
Napsauta laajentaaksesi...

Does Catalonia want to leave Spain?

Catalonia's top security official says the regional government is refusing to hand over control of a regional police force to Spanish central authorities who are trying to stop a referendum on independence.
Napsauta laajentaaksesi...