Wikipedia sanoi:
In video games, a quick time event (QTE) is a method of context-sensitive gameplay in which the player performs actions on the control device shortly after the appearance of an on-screen instruction/prompt.
Napsauta laajentaaksesi...

For me, it’s an excellent case of how a whole can be larger than the sum of its parts. It’s an openworld RPG, an epic story, a virtual time travel experience, a tactical combat game, a history lesson, and a beautiful digital landscape all in one.
Napsauta laajentaaksesi... 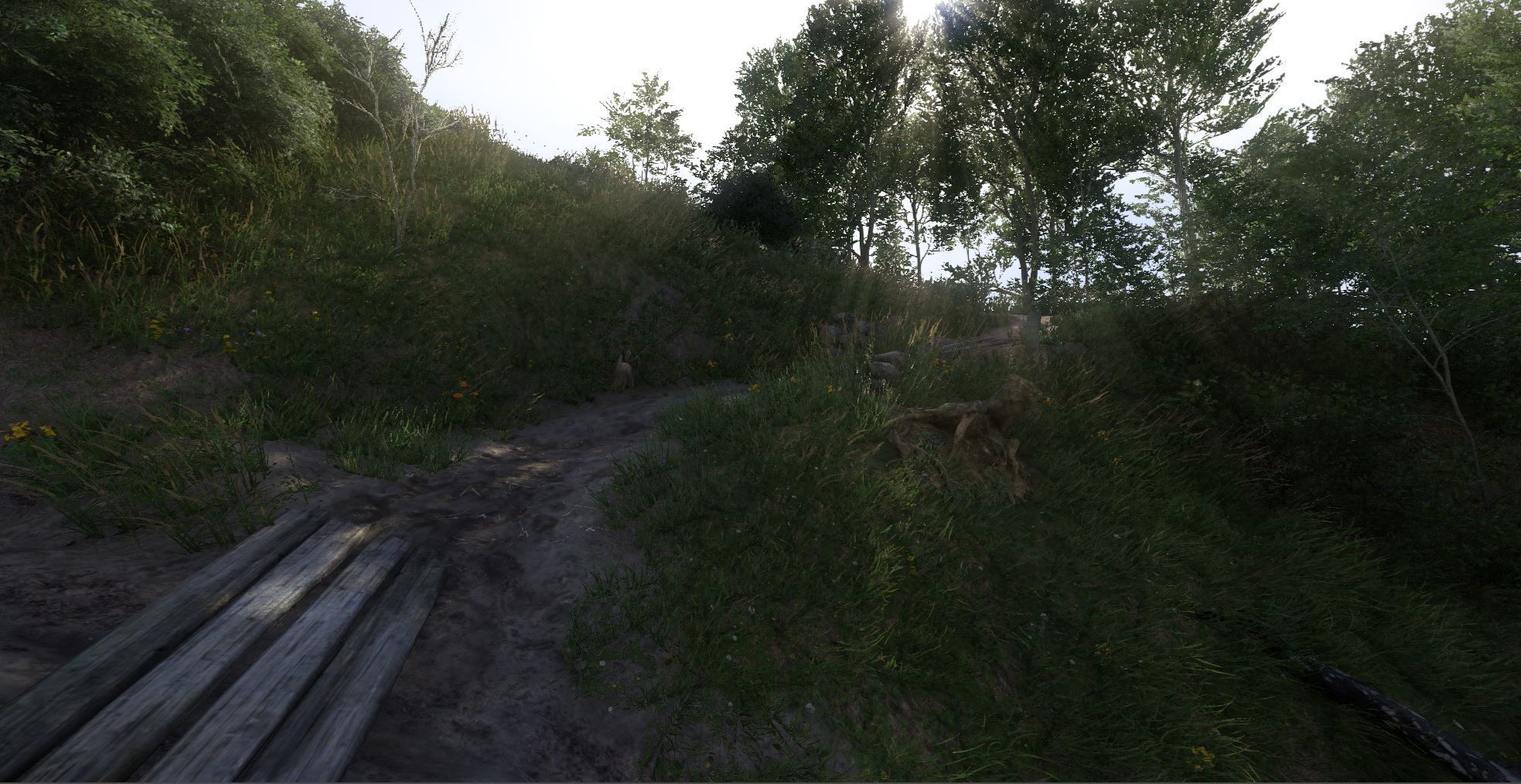 Tomáš Barák sanoi:
Currently KCD runs best on a 8 core CPU. If you remove 4 cores it will slow the application almost twice, but if you add 8 it won’t run two times faster (my guess ).
Napsauta laajentaaksesi...

We currently don’t have any Ryzen CPUs in the studio. But we plan to get some to test and optimize for. We have a good relationship with AMD, I would say, better than with Intel .
Napsauta laajentaaksesi...

KCD won’t fit into 8GB of RAM on PC. It will probably swap a lot or you will have to lower the detail to spare some memory. Please buy at least 16GB .
Napsauta laajentaaksesi...

now we are able to simulate more than 500 NPC brains in 10ms on PS4 (not counting the thousands of smart/trigger areas and objects)
Napsauta laajentaaksesi...

"We at Warhorse happily present the latest development progress of Kingdom Come: Deliverance in our newest video update: Cast & Cutscenes. You will be able to relish the elaborate story of Kingdom Come: Deliverance, by virtue of more than 240 exciting minutes of full performance captured cut scenes, created in our own in-house Motion Capture Studio.

The legendary Brian Blessed will perform in the role of Konrad Kyeser, a famous German military engineer. Henry, the son of a blacksmith on his tragic adventure through Bohemia, will be played by the talented actor, Tom McKay. Henry wants to avenge his family and secure the sword forged together with his father, played by Matthew Wolf.

But they are not the only ones; over 50 capable actors from Czech Republic, Great Britain, and the USA were involved to bring our vision of Kingdom Come: Deliverance to life. Enjoy the video:"

Kingdom Come: Deliverance is a story-driven open-world RPG that immerses you in an epic adventure in the Holy Roman Empire.

Bohemia – located in the heart of Europe, the region is rich in culture, silver, and sprawling castles. The death of its beloved ruler, Emperor Charles IV, has plunged the kingdom into dark times: war, corruption, and discord are tearing this jewel of the Holy Roman Empire apart.

One of Charles' sons, Wenceslas, has inherited the crown. Unlike his father, Wenceslas is a naive, self-indulgent, unambitious monarch. His half-brother and King of Hungary, Sigismund the Red Fox, senses weakness in Wenceslas. Feigning good will, Sigismund travels to Bohemia and kidnaps his half-brother. With no king on the throne, Sigismund is now free to plunder Bohemia and seize its riches.

In the midst of this chaos, you're Henry, the son of a blacksmith. Your peaceful life is shattered when a mercenary raid, ordered by King Sigismund himself, burns your village to the ground. By bittersweet fortune, you are one of the sole survivors of this massacre.

Without a home, family, or future you end up in the service of Lord Radzig Kobyla, who is forming a resistance against the invasion. Fate drags you into this bloody conflict and shoves you into a raging civil war, where you help fight for the future of Bohemia.

Redeem your past and emerge a hero!

Warhorse Studios sanoi:
Are you ready for the fight? Follow us for our global announcement on Friday, June 9th!
Napsauta laajentaaksesi...

Hello Everyone, my name is Rick and I am the US Community Manager for Warhorse Studios. I wanted to thank you for checking us out and being an awesome fan of our game! I have put together a mini FAQ for our Beta and a few other tidbits of info:

1) How do I participate in the Beta?

Visit https://kingdomcomerpg.com and purchase your preferred edition of the game. The Beta is not an open beta.

2) I downloaded the beta but I'm having issues launching it. Who do I contact for help?

3) I purchased the digital version for the PC (to support Warhorse Studios and to play the early build) but I really wanted to play the game for my Xbox/PlayStation. How will I receive a copy of the console version?

Rest assured, you will be able to switch to the console of your choice, even if you have already purchased the PC version. More details to come later.

4) I have played the Beta and even though my PC meets the requirements for the Beta (and more), I can’t get the game to run at more than 30fps. Why so buggy?

Fair question(s). The Beta of Kingdom Come: Deliverance is more of a tech build and it gives the gamer an idea of what our game will be like – story, atmosphere, environment, combat, etc. The Beta was released in March of 2016 and has not received an update since then (see below).

We are completely devoted to the final build of our game. If we were to make improvements to the Beta (better frames, less buggy, etc.), we would have to put less focus on the final version of our game, which would result in an even longer delay. It is important to remember that the Beta does NOT represent the current status of our game.

What we can tell you is that our latest build runs much smoother than the Beta – FPS, colors, shading, far less bugs, etc. Also keep in mind that we have Dan Vavra (the Creative Director behind Mafia 1 & 2). Quality is of the utmost importance!

5) Where are all the updates?

We post a "Weekly Torch" on our forums, Reddit and Steam page EVERY Friday. You will find an interview with one member of Warhorse Studios regarding his or her work on Kingdom Come: Deliverance.

We post video updates to inform our fans of the latest news: Warhorse Studios

You can even see the first quest (LIVE and IN-GAME) on our Youtube Channel! We also revealed some really amazing actors for our game. Be sure to check it out here:


We are presenting the latest development update for Kingdom Come: Deliverance. In this new video, we will take a close look at the cutscene production.

6) Will there be blood/gore or dismemberment?

We are considering some levels of gore (realistic, not over the top so-called goreporn). Blood is used in the Beta and it's a key feature in combat. Being that your opponent does not have a visible health bar, you will get signals letting you know that he is wounded/deeply hurt. Bleeding is clearly one of those signs. Keep in mind that it is nearly impossible to dismember a guy wearing a ring mail. It is also technically very challenging due to our cloth layers system.

7) Will there be classes in the game?

The simple answer is no. However, you will have the choice to play like a knight, thief, or a bard. Think of it like Skyrim: you gain experience based on what you do/how you play. You play like a thief for one quest and then you play like a knight and wipe everyone out for the next quest.

8) What is the length of the average playthrough of the game?

You could just do the main quests, skip everything else and finish the game in roughly 30 hours or so. However, just as Skyrim, The Witcher and other great RPG's, you could spend a countless amount of hours in the open-world of Bohemia!!!

10) Will there be multiplayer?

Not for our first game. We want to focus on making a fantastic single player experience for everyone. We will definitely be making a sequel, so who knows what the future may hold...

11) Will KCD be available on Steam the moment it releases?

12) Will the game release on all platforms (including PC) at the same time?

13) So how do the three Acts work? Will there be 3 separate games?

When we first started making KCD, we had planned on making 3 separate games. However, our first game got big pretty fast, so we decided to put the first 2 Acts together and then we plan on putting the 3rd Act into our sequel.

I will be updating this over time. You can follow me Rick Lagnese @ E3 (@rick5292) | Twitter on Twitter for KCD updates and other things also. Thanks for being the BEST part of Kingdom Come: Deliverance!!!
Napsauta laajentaaksesi...