Thank you Dave for featuring our brand on your channel and for opening this very interesting discussion. Keyboards aside (I'm not a fan of the MAX 17 keyboard myself, but I could probably get used to it. All other keyboards got good reviews at Notebookcheck), I would like to respond to your argument that the extra clock speeds might not matter to everyone due to diminishing returns in the silicon and the trade-off in fan noise. You make a very good point and it warrants some explanation.

This is a very long answer and it will go into some behind-the-scenes stuff, especially related to how system vendors have to deal with limitations enforced by their key component vendors. There is a very practical tip at the end of the reply that is useful for every 3D gamer - beginner or club-member alike - so please hear me out!

It has often been a dilemma in system design in our ODM partners: should we design and default to the absolute maximum to come out at the top end of the benchmark lists? Or should we default to a more moderate medium and then risk to be left behind in reviews?

To address this concern, all of our laptops have different performance profiles. Those can be called Silent, Balanced, Entertainment, Performance, Enthusiast, Overboost, Eluktroboost etc. - all of these profiles modify the CPU Power Limits and the aggressiveness of the Fan Table. For an impartial reviewer, it's tough to test a product in 2 or 3 such profiles because you'd have to repeat all of the benchmarks and noise/temp measurements in each profile. So most reviewers just pick either the default profile (which in our systems is usually already faster than the average competition) or the fastest (overclocked) profile. When then comparing fan noise against other, slower laptops, it often paints a one-sided picture in which our laptop comes out as unusually loud. But this rather simplistic view ignores the fact that the laptop can also be tuned to be run at lower performance, with lower fan noise as well.

However, with tuning the laptop to a lower performance/temps/noise, there is a key challenge that is rarely mentioned but which explains why even our most "Silent" profile is often still way too powerful in a gaming scenario. And this challenge comes from our friends in Team Green.

You see, in Intel and AMD CPUs, you can freely adjust the power limits on-the-fly without a reboot. In Intel, they are called PL1/PL2, in AMD it's PPT. They allow you to control exactly how much power the CPU can take from the mainboard, which dictates clock speeds and temperatures. It is a very easy and straightforward API that gives the OEM full control over the system.

In NVIDIA, however, the power limit is baked into the VBIOS and can hardly be adjusted. For example, a OEM might chose to request an RTX 2060 VBIOS with 65W (Max-Q). Apart from minute TGP-up mechanics (e.g. take +5W if the CPU is Idle), the power limit is fixed in the VBIOS and the OEM is locked out of making further adjustments - both up and down. The graphics driver will always aim to max-out the given power limit.

If you want to take the same NVIDIA silicon and use the official 100W or even 110W tier, you'll get a different VBIOS from NVIDIA. This one can then not be adjusted down to 65W anymore. In other words, a system vendor who wants to bring the hardware to its full performance potential is then stuck at running at those very high power limits. There is no API to reduce power limit in a "Balanced" or "Silent" system power mode.

The only exception to this rule are the "p-states". Those are used by system vendors to strongly reduce GPU power consumption in Battery-mode. The p-states are kind of an emergency measure that get triggered when the battery discharge co-efficient (how much power is drawn from the battery at any given moment) exceeds a certain safe limit. This is implemented to save your battery from premature aging

The problem with the p-states: they are not designed to keep the GPU run at any kind of usable sweet spot. Instead, once p5 or lower is triggered, they clock the VRAM down to 405/810MHz, creating a huge bottleneck and starving the GPU of fast access to its memory content. This effectively reduces GPU performance down to 20%. In other words: the p-states pretty much only two "full power" and "virtually grind down to a halt" status, without any usable sweet spot in between. You can see this in countless gaming laptop reviews where the performance on battery is tested. Even laptops with very large batteries have atrocious GPU performance in battery mode because of the way the p-states are designed by default in NVIDIA's VBIOS.

To add further to this lack of flexibility, system vendors are not allowed to manually adjust p-states while running on AC power. Technically, it's possible (the API exists), but you you just can't - end of story.

NVIDIA's allowable range is between 75°C and 87°C. A system vendor can pick any number in this spectrum and bake it into their BIOS. Low target will make the GPU boost less, giving you a gentle performance reduction. With high targets, GPU Boost will be able to hold longer but you'll also have to compensate with additional fan speed.

Most laptop OEMs pick 87°C for this target with XMG FUSION 15 being a notable exception at 75°C.

Again, this is hard-baked and can't be charged. Let's say you want 75°C for your "Silent Gaming" mode and 87°C for your Overclocked Profile - no can do. The story is similar to p-states: the API exists, but the user is just not allowed to use it. Case in point: we can adjust GPU temp target on-the-fly without any side-effects with a tool under NDA. But when we ask our ODM partners to implement different GPU temp targets for different system power profiles, they say it's not supported or it at least would require a reboot because it would have to be adjusted by a BIOS settings, not by a real-time API in the graphics driver.

Those are the key reasons why it is so hard for us to walk the tightrope between balanced "sweet spot" performance and record-setting "get the most value for your dollar" overclocking in laptops.

However, beyond the freedom we allow in our BIOS for CPU Undervolting and the outstanding range of CPU performance, there is one way for end-users to make their own adjustments in curbing NVIDIA's "always 100%" policy, and that is: FPS Limiting.

Many gamers might not realize: when your framerate exceeds the maximum refresh rate of your monitor (let's say 60 or 144Hz), the GPU will still continue to churn out additional frames, even if you never see them. Even G-SYNC or FreeSync do not curb this behavior. Also, reducing the image quality settings (Texture resolution, Shadows etc.) to "Low" will not significantly reduce GPU load and thermals. Because: the GPU will always put out the max. number of frames the hardware and game engine would allow. But since the beginning of 2020, you can manually set of "Max Frame Rate" limits individually for each game in NVIDIA's Control Panel. If you are not an eSport person who might need 300+ frames in CS:GO for certain engine/physics advantages, you might be well advised to limit your FPS to the refresh rate of your monitor. In some especially demanding games, you might want to limit it even further to achieve a sweet spot between fan noise and smoothness of the experience.

With a FPS Limiter, you can also achieve a "Silent Gaming" profile. Let's say you don't feel like wearing your headphones today and your partner and roommate is sharing the couch with you: just enter the "Balanced" or "Silent" mode of your laptop and limit your FPS to (let's say) 60fps - you'll see that your fan noise suddenly will be much, much lower and perfectly tolerable.

-- Read more behind the link

If have recently written a guest article on Igor's Lab to further explain FPS Limiters, how they differ from NVIDIA's "Whisper Mode" and why G-SYNC (or VRR) is not a solution. The article includes graphic charts of HWiNFO64 logging data (CPU and GPU Package Power vs. real-time FPS) that very clearly illustrates the power savings in the given examples.

I would invite everyone to go and read the full article (written by XMG) on Igor's Lab behind this link: 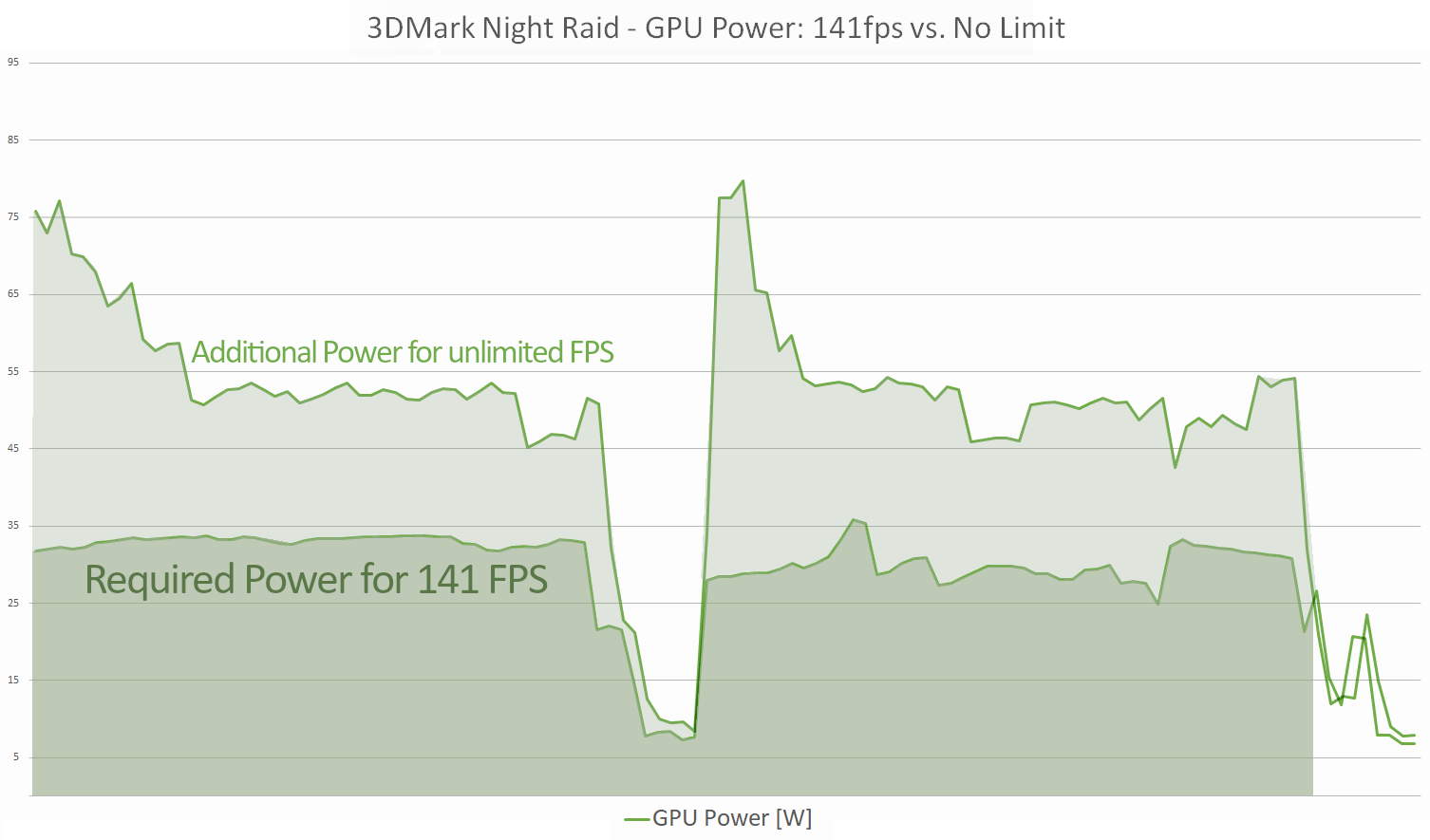 Hi everyone, in our forums, questions such as "why is my graphics card getting so hot" are often answered with a hint towards FPS limiters. But it happened only recently that NVIDIA has finally packed…

You can also just google the article: "Using a Frame Limiter to de-noise your gaming laptop without losing performance and easier to do than ever before | XMG guest review"

-- Why hardware and thermals matter

To bring this back to our laptop, these kind of easy-to-implement tuning methods will again bring out the advantages of having a laptop with good airflow, strong heatpipes, good coverage on voltage regulators plus outstanding thermal grease (or even liquid metal) and serviceability: those hardware advantages will give you much greater gains in tuning compared to mainstream systems with less optimized cooling system.

This is why our laptops have recently grown so popular with the enthusiast crowd: we sell capable hardware into the hands of capable users who know (or want to learn) how to get the most out of the systems they own. Are you interested in becoming a member of this club? Ask your questions by replying to this post or go and join our XMG_gg sub-reddit.

We are looking forward to your feedback!