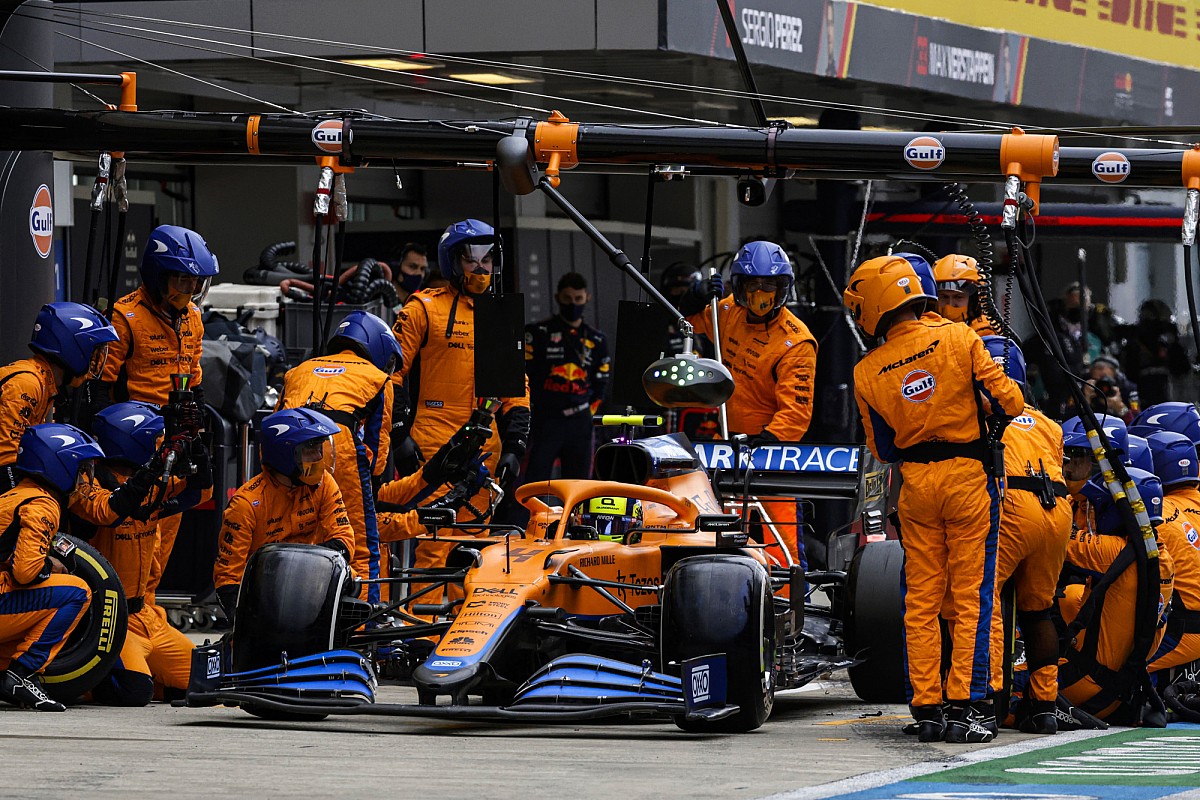 Norris gets reprimand for pitlane entry incident in Sochi

Lando Norris has kept seventh place in Sunday's Formula 1 Russian Grand Prix after only receiving a reprimand for cutting pit entry during the late downpour.

Alfa Romeo’s Kimi Raikkonen leaves it too late to turn into the Mugello pits under the Safety Car, following Racing Point driver Lance Stroll’s crash at the 2020 Formula 1 Tuscan Grand Prix, and is given a five-second time penalty by the stewards

Norris gets reprimand for pitlane entry incident in Sochi

Lando Norris has kept seventh place in Sunday's Formula 1 Russian Grand Prix after only receiving a reprimand for cutting pit entry during the late downpour.

Good call that could've seen him move up in the points. Ultimately couldn't get his already used inters to work. P11 --> P10

Good call that saw him gain the most positions out of any driver during the pitstops. P13 --> P5

Räikkönen: Discussed the option of pitting and tyre choice with his engineer during lap 48. In classic Kimi fashion made the call to come in on his own and entered the pitlane at 1:29:07, lap 48.

Mazepin: Told his engineer to box for inters during lap 48. Reaffirmed to his engineer that inters were needed "otherwise I'm not gonna keep it on track". Entered the pitlane at 1:29:14, lap 48.

Good call that kept him on track and gave him the ability to overtake some cars for the first time, including unlapping himself multiple times. Too far back for it to matter. P19 --> P18 (Latifi retirement)

Verstappen: Made the call not to pit during lap 48. After seeing multiple cars slide off in front of him and feeling like he was losing time, made the call with his engineer to box for inters the following lap. Entered the pitlane at 1:30:39, lap 49.

Good call that saw him gain the most points out of anyone. Overtaking Sainz and Ricciardo right before the pits secured his podium. P7 --> P2

Sainz: Thought about pitting during lap 48, but decided to stay out "one more lap". Made the call to box for inters the following lap. Entered the pits at 1:30:41, lap 49.

Lost 3 places during the "one more lap" that he decided to stay out. It is unlikely that he would have beaten Verstappen for P2 if he pitted earlier. In the end a good call that got him his 3rd podium of the year. P4 --> P3

Ricciardo: Informed his team it was too slippery to stay out. Made the call for inters together with his engineer during lap 49. Entered the pits at 1:30:43, lap 49.

Good call that gained him two positions and gave him a chance at a podium. P6 --> P4

Stroll: After hitting Vettel, was told to box for inters during lap 48. Changed his mind and ignored orders to box after seeing how dry some parts of the track were. "Can you stay out on these conditions" "Yes!" immediately followed by a trip into the barrier. After giving Gasly a love tap, was asked for softs or inters. Asked to pit for softs during lap 49. Entered the pits at 1:31:06, lap 49, where his team ignored the call for softs and put him on inters.

Although in a quite frantic manner, his team's decision to box him for inters was correct. While Stroll's decision to stay out another lap was reasonable, his driving wasn't. P10 --> P11

Hamilton: Was told to box during lap 48, but ignored his engineer and stayed out. Being told "there's more [rain] coming" convinced him to enter the pits at 1:31:41, lap 49.

Great call by Mercedes to call in Hamilton while he was hesitant at first if it was the right decision or not. Ended up winning him the race. P2 --> P1

Tsunoda: Was called in to box without any discussion right before lap 49. Entered the pits at 1:29:49, lap 49, and was fitted with the soft tyre. Finally gave feedback during lap 50 that it's too slippery and the inters would be faster. Was told by his engineer to stay out. Was called in to box the following lap and entered the pits at 1:34:37, lap 51.

Good call by his engineer to pit him that early. Very bad call to fit him on softs. P18 --> P17 (Latifi retirement)

In hindsight a bad call to stay out during lap 49. Managed to save points through his wet weather driving skills. P5 --> P6

Perez: Was told by his engineer during lap 49 and 50 that it was his call if he wanted to pit for inters. Decided to stay out. Finally entered the pits at 1:34:44, lap 51, where he had a small shunt into the wall in pit entry.

Was left mostly on his own to make the decision for inters. Did not make the right one. P3 --> P9

Gambled with his decision and, like many others, got caught out by the sudden rain. P9 --> P12

Gasly: After getting hit by a slippery Stroll, made the call in lap 49 to stay out to try and hang on. After being informed that the rain "is not getting any worse" by his engineer, decided to stay out during lap 50 as well. Was met with "so much rain" instead. Entered the pits at 1:35:56, lap 52.

Was not happy with the information his engineer gave him. "Whatever we do with the weather forecast, we need to change". P14 --> P13

Ocon: Told his engineer during lap 48 that it wasn't wet enough yet and didn't pit during lap 49. Was told during lap 50 that the rain would ease off and there was no further discussion to pit. Quickly after starting the next lap was told "Reports of heavy rain" by his engineer. Meanwhile driving in the heavy rain, they agreed to box. Entered the pitlane at 1:36:05, lap 52.

In hindsight a bad decision that saw him miss out on an opportunity to salvage his race and score some points. P12 --> P14

No radio communication with his team led Giovinazzi to be one of the last ones to pit. P16 --> P16

Norris: Got asked about inters during lap 49 but gave a clear "NO!" for an answer. Went for the all or nothing approach the following lap while 2nd place was still on the table, ultimately pitting 2 laps too late. Entered the pitlane at 1:36:38, lap 52.

In hindsight a bad call that lost them the race. The all or nothing approach saw them lose out on a podium all together. P1 --> P7

Leclerc: Was told that Sainz was coming in for inters during lap 49, just before overtaking him. Was probably wise to stay out or we would have had a Sakhir 2020 repeat. After discussing the rain with his engineer, decided to stay out during lap 50. "If you think you can keep the car on track, stay out, if not, it's best to come in" led Leclerc to make the insane call to stay out during lap 51. Being told to box right before pit entry did not change his mind. After multiple off-track adventures, entered the pits at 1:38:01, being the last to pit during the final lap of the grand prix (lap 53).

Was unlucky during lap 49 that his pit crew was waiting to pit Sainz. Could have salvaged some points by pitting the next lap, but unclear communication from his engineer led him to gamble and stay out. Having had so much fun sliding off the track, he decided to do it again for another lap. P8 --> P15